The history of Koto

The history and the trajectory of Koto 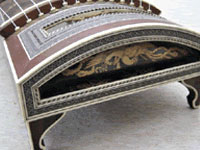 Back to nearly 1300 years ago, Nara-era, Chinese Koto and Japanese Koto which seemed to be made in Yayoi-era were combined and gradually refined by people who loved music. As time goes on, more and more people had got attracted by Koto because of the “Shirabe” which healed and silently encouraged people’s hearts. Nowadays, we’re going through busy days surrounded by so many objects. Listening to the sound of Koto makes our bodies and hearts remind of old memories. 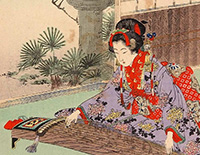 The birth of new genre of Koto from temple music
In kamakura-era, when the power of nobles declined and samurai or monks began to distinguish, Koto was spread as an instrument of temple music. In Muromachi-era which Japanese style pictures, gardens, architectures, and cultures become prosperous, people started to pursue many ways of playing and types of Koto. In the end of this era, the monk named Kenjun from Fukuoka composed several songs based on Gagaku.
And then, the new genre named Tsukushi-Ryuso-Kyoku was born. When the Warring States period started in Japan, many successors carried on the same way as Kenjun.

Koto’s spread to the public because of the culture sustained by merchants
After the unification of the nation by Oda and Toyotomi, Edo-era began and the culture sustained by merchants reached its peak. People who played Koto were monk at first but then changed into musicians. Yatuzaki who is the origin of Kyoto’s famous sweets is one of the musicians. He was a musician who lost his sight when he was a little and he studied Tsukushi-Ryuso-Kyoku under Hosui. He generated new compositions of Koto by improving Tsukushi-Ryuso-Kyoku. He produced expressive and skilled way of playing and also made the series of compositions and the basis of certain type of songs called Dan-mono.

This is the way how Koto started to be spread to all over Japan from Kyoto.

The appearance of Yamada school and Ikuta school
When Joruri which is human-feeling-based narratives with puppets were popular around Kyoto, Yamada made Yamada school compositions based on the Joruri in Edo(Tokyo). Furthermore, Ikuta improved the way of tuning of strings and the way of playing to suit the ensemble with Shamisen (Japanese traditional instrument). He composed many famous songs and they are called Ikuta school. Upper-classed merchant made their daughters learn Koto and it became a custom among them around this time. The latter half of Edo-era, very famous songs which were constituted by three different parts were born

The change from one melody to several
Yaezaki made this change by composing songs to be played with Shamisen. By this change, the level of ensemble was dramatically risen. In Kyoryu-Tegotomono which were songs such as “Wakana”, ”Keshi-no-hana”, and “Yugao”. Even now we can enjoy these songs at the concerts. The power of expression of Koto was brought out by musician such as Mitsuzaki and Yoshizaki. There are many love-themed songs, for example Godan-Kinuta which expresses the women’s feelings. Kinuta is a stone to make cloth smooth by tapping, and women think about the person who will wear that and whom they love while they use it.

The composition techniques influenced by Western music
Modern Japan was born by Meiji Restoration. The songs composed before Meiji-era began to be called as classics. By importing Western lifestyles and way of thinking. New values were brought into Koto’s world. Meiji Shinkyoku (the new songs of Meiji-era) which were composed during Meiji-era often used Western music’s technique. Several song were played pizzicato, plucking strings with nails.

Koto, expressing individual sensitivity and pursuing new style
After Michio Miyagi who is famous for ”Haru-no-umi” (The sea of the spring) appeared, the essense of Japanese and Western styles were come together and modern style was explored by blowing individual sensitivities. Michio Miyagi left around 700 songs after his first composition at 16 years old. He influenced many young composers and musicians. After WWⅡ, post-modern Japanese style music had started to be recognized and then, Western style musician accepted Koto with a kind of surprise. Koto got to be introduced to overseas. While Japan experienced rapid economic growth, there is a boom taking various lessons to improve oneself and Koto became popular among families. Recently, being beyond the genres, artists and groups which are trying to combine Japanese instruments with pops, jazz, and rock music got attentions. Their attitude to pursue new style of music are accepted favorably.